As a mother, I spend a lot of time reading out loud to my kids. We have so many picture books, that occasionally one will fall off the shelf (or out from under the couch) that I swear I’ve never seen before. My kids (5 year old twins, and a 2 year old) all love reading books, but as they are too young to read themselves, I do the reading for them. Even the best books can only be read so many times before you want to pull your hair out, and if you have kids you understand that they want to read the same book over and over and over.

And over and over.

(Annoyed yet? Because that is just a small taste of what it’s like to read the same book 453,499 times.)

My twins gained the attention span for longer books about a year ago, and since then I’ve been on a quest to find great chapter books to read to them. We have tried recommended books, as well as random ones pulled off the shelf. Some have been painful experiences, but in our adventures in reading I’ve come across some real winners too. I’m going to share them with you.

To make my list, a book had to be enjoyable to both me and my kids. Some books are painful to read. Seriously. I want to poke my eyes out. My kids love them, but I. Just. Can’t. Conversely, some young chapter books are hilarious, witty, and completely over my kids’ heads. I laughed out loud. They pushed and kicked each other.

To be included on this list, the books had to have a bare minimum quality in their writing. I found a good number of chapter books that were poorly written. Nearly every rule we learn as writers was ignored aggressively.

Finally, I didn’t include books with main characters I didn’t want my kids to emulate. There are a surprising number of books aimed at young children that contain bullies. Worse, many of them fail to resolve the conflict in a way that will teach their readers to to deal with a similar experiences in a healthy way. These bully stories didn’t reflect my experience as a child, nor do they reflect the experience of my twins. I’m sure that at some point, they will encounter mean children, but right now, the kids they interact with are not malicious. I felt as I was reading some of these chapter books to my kids, that I was introducing them to the idea that you could be mean to another child. I don’t want that to be a lesson they get from any book that I am reading to them. Other children may experience these issues at an earlier age than mine. They may relate to the book, but if I felt that the story was teaching my kids things I didn’t like, it did not make the list.

The Secrets of Droon by Tony Abbott

This is fantasy series that we are still working our way through. There are 44 books so we’re going to be at it for a while. The story follows three kids, Eric, Julie, and Neal who enter the enchanted world of Droon where they befriend a princess named Keeah.

My kids love the Droon books, although I prefer Kingdom of Wrenly (see below) as the Droon books felt a little more formulaic to me. But Droon does have a more whimsical take on fantasy. So far the creatures we’ve encountered haven’t been traditional dragons, fairies and the like, but unique creations to the world of Droon.

I like how the villain is handled in the Droon books (so far). I have mixed feelings about villains for young kids. I’ve noticed that many books geared toward young kids remove villains from traditional stories and this annoys me. My kids have never heard traditional stories like the three little pigs because so much of them have been sanitized. On the other hand, my son is scared of everything. I don’t want to emphasize the idea of evil in the world by constantly reading about it. He and his sister have enough anxiety about the dangers around them without me adding to that through reading. Droon’s villain is bad, but in a light way and I feel that my kids can understand that he is a “bad guy” in the story while not becoming anxious enough to keep them up at night. 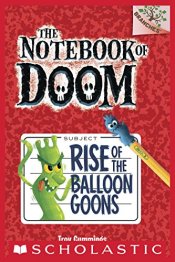 The Notebook of Doom by Troy Cummings

This is another series we’re in the middle of reading and my kids are really into it. While you wouldn’t think a series about monsters is a great fit for kids that are already afraid of so many things, these books have a humorous element that lightens the fear factor and makes the books enjoyable. This series follows new kid Alexander as he discovers a secret notebook documenting the monsters that inhabit his new hometown. He and his two friends Rip and Nikki must save the town from monsters the adults can’t see.

One thing I don’t love about this story is that all the adults are incompetent. I love that the children save the day and want my kids to feel empowered, but I also want them to recognize that the trusted adults in their life are there to help them and that they can always turn to us when they need to. Incompetent adults in stories are one of my biggest reading pet peeves and it’s a pretty common trope. Despite that flaw, the books are fun and quick to read, and I enjoy them as much as the kids

The Kingdom of Wrenly by Jordan Quinn

We received the first of this 13 book series as a birthday present for my son’s fifth birthday. The story follows Lucas, a prince in Wrenly and his best friend Clara on adventures that include mermaids, dragons, giants, trolls, fairies, and just about any other mythical creature you can imagine. I had read some fantasy stories with the kids before Wrenly, but they had a hard time keeping interested with the lengthy world building that is common in fantasy. The Wrenly books are accessible to kids, while still including all the fun fantastical elements. They have short, easy to consume chapters and simple stories. My twins, both the boy and girl, love them, have dreamed about them, and have been converted to a true love of dragons because of these books.

As a parent, I appreciate that the kids in the story sometimes teach the adults lessons and the adults sometimes teach the kids lessons. One of the overreaching themes in the series is encountering things that at first appear different or scary but once understood are valued and respected. There are no real villains but the adventures don’t lack because of it.

Commander in Cheese by Lindsey Leavitt

I found this series on Amazon while searching for books to give my kids for Christma—uh I mean, Santa gave us this book last Christmas because he knows we were looking for chapter books.

The series follows mice siblings Ava and Dean in their adventures living in the White House. The books are full of humor and the characters instantly memorable. What I also like is the true information woven into the story. We learned interesting facts about the white house and past presidents as we read. At the end of the book there are more facts that relate to the particular adventure Ava and Dean experienced in the book.

The actual (human) president in the white house is a woman with two elementary aged kids. While the story focuses on the mice, the human occupants of the white house make appearances, and I appreciate the image the book presents of a female president who performs her very important job and loves her family at the same time.

Okay, so the Inspector Flytrap series is maybe my favorite one on this list but it is also the weirdest. It chronicles a Venus Flytrap whose dream in life is to become the world’s greatest detective with the help of his assistant, Nina the Goat. If that doesn’t sound weird enough yet, just read it. It gets weirder. But it is AMAZING. The books are hilarious. The humor was accessible for my kids, but there were tidbits in there for the parents as well. Often, it seemed random, but the thing I loved the most is how all the random pieces fit together to create a bigger story in each book and in the series as a whole.

The stories are broken into separate parts as well as chapters. It’s fast paced and requires animated reading. You can’t monotone your way through Inspector Flytrap. Please go read these books. I really love them. My kids do too. It’s weird. It’s wonderful. Just trust me on this. 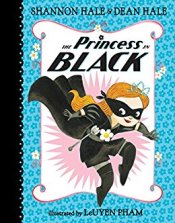 The Princess in Black by Shannon Hale

One thing I love about this book is that the main character is a girl, but the books appeal as much to my son as to my daughter. So often, books with a female protagonist are labeled “girl books” and dismissed as unsuitable for half the population. Having read some of the “girl books” for kids, I can see why, although I’d argue that they aren’t usually suitable for anyone. My daughter enjoys “girl books”. My son does not and neither do I. They tend to promote stereotypes and focus on painfully boring story lines. Perhaps the reason boys haven’t been reading books with female protagonists is because so many of those books have been poor quality. Not so with the Princess in Black.

The Princess in Black series is a good starting point for chapter books because it looks and reads like an extended picture book. Like I said, even my two-year-old loves them. She doesn’t have the attention span for any of the other books on this list.

There you have it. My list of chapter books to read to your kids. I’m always on the look out for new ones, so if you have any recommendations, please leave a comment below. Hopefully we’ll find a whole stack of books to read as the kids get older.